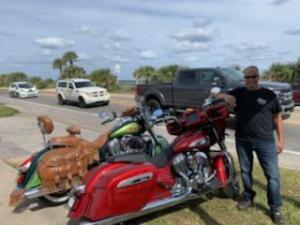 William Richard Marcello passed away peacefully on September 4, 2022 at Danbury Hospital in Danbury CT.  William, known to most as Billy, was born on January 18, 1944 in Mt. Kisco, NY to the late Dominick Marcello and Maria Grace Marcello.

Billy was a long-time resident of Pleasantville, NY and attended Pleasantville schools.  He went on to become a skilled carpenter and was a member of Local 149 for many years before realizing his dream of becoming an independent business owner.  He moved to Danbury, CT and opened Lakeside Pub in 2002 which became a community staple.

Billy was a hardworking, determined man with a big heart.  He was always quick to lend a helping hand and was happy to organize and host many charitable events at Lakeside through the years.  He enjoyed the simple pleasures in life such as good conversation with his many customers, golfing with his buddies, riding his motorcycle through the backroads of NY and CT, and taking yearly trips to Florida.

Billy was a beloved father, grandfather, brother, uncle and cousin. He was the stable rock of his family and will be dearly missed.

He is predeceased by his beloved son Eric Marcello.

In lieu of flowers, the family asks that you consider making a donation in Billy’s name to MDS Foundation online at www.mds-foundation.org/donate/  Billy fought valiantly against his MDS cancer diagnosis and was a warrior until the very end.

To light a candle or leave a condolence in his memory, please visit www.DanburyMemorial.com.

To send flowers to the family or plant a tree in memory of William Richard Marcello, please visit our floral store.