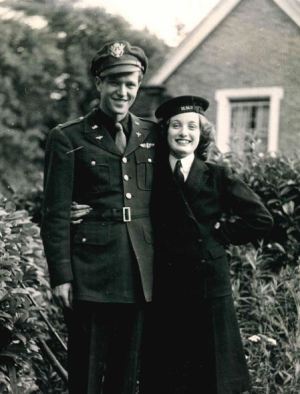 Stanley Adelman was born in New York City on December 1, 1924 to Robert and Clara Adelman.  He attended the Little Red School House in Greenwich Village and the Bronx High School of Science.

In World War II, Major Adelman served in the 451st Bombardment Squadron, 322nd Bombardment Group, 9th Air Force.  He flew 53 missions aboard Martin B26 Marauders in Europe.  Several of those missions were aboard “Flak Bait”, a B26 Marauder which survived 206 operational missions over Europe, more than any other aircraft during World War II.  (The fuselage of “Flak Bait” hangs in the Smithsonian Museum’s Mary Baker Engen Restoration Hangar museum in Chantilly, Virginia.)

On November 9, 1944, he was on board the B26 “Bombs for Bosche” which made an emergency landing on a narrow, asphalt highway in France after the plane had exhausted its gas supply returning from a bombing mission over Germany in a snow and sleet storm.  The casualty rate for his squadron was so high that he considered every day that he survived a gift, for the rest of his life.

While stationed at Andrews Field in Essex England, he met his future wife Jill Bardwell, who was a wireless operator in the Women’s Royal English Navy, known as the WRENS.  They were married on June 22, 1945 in England.  (Their wedding photograph is attached.)  They celebrated their 75th wedding anniversary this year.

Mr. Adelman was relieved from active duty on November 17, 1945.  He returned with his English wife to New York and attended New York University.  He graduated in 1949.  He was recalled for active duty in 1950 for service in the Korean War.

His career in the Air Force effectively ended in 1953 when he was “red-flagged” because he was alleged to be “affiliated or sympathetically associated with Communist organizations.”  Although this allegation was untrue, it was true that he maintained “a close continuing association” with his mother, Clara Adelman.  Clara Adelman was a Communist.

After successfully challenging his “red flag” designation, Major Adelman served in the Air National Guard until December 1, 1984.  He flew transports to Vietnam during the Vietnam War.  He retired as a Major.

On May 11, 2018, Major Adelman received the French National Order of the Legion of Honor from the government of France, in “eternal gratitude to those who fought for the freedom of France,” in World War II.  The honor was bestowed in a ceremony at the Consulate General of France in New York.

Mr. Adelman joined American Airlines in 1953 and served as a pilot at American until his retirement in 1984.

After retirement, Stan and his wife Jill spent their time sailing.  They owned a series of beautiful sailboats which they sailed from their home on the water in Westport, Connecticut, to Florida and the Caribbean each winter.  They continued to sail until they were into their 80’s.

To send flowers to the family or plant a tree in memory of Stanley Adelman, please visit our floral store.

You can still show your support by sending flowers directly to the family, or by planting a memorial tree in the memory of Stanley Adelman
Share a memory
© 2020 Danbury Memorial Funeral Home and Cremation Services LLC.. All Rights Reserved. Funeral Home website by CFS & TA | Terms of Use | Privacy Policy