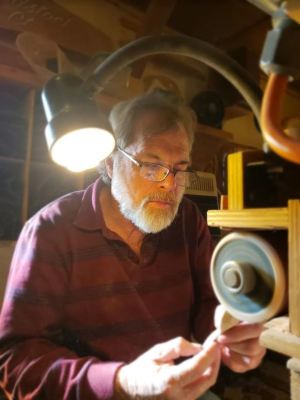 Husband, father, friend and sculptor; David Edward Castruccio’s earthly journey came to an end on October 4, 2019 at 5:29 pm in Danbury, CT, the town where he was born. He passed peacefully surrounded by his wife, daughters and friends. He faced his cancer with unwavering bravery, compassion for others, selflessness, humor and grace throughout, never letting the illness define or restrict him. David remained humble, engaging and selfless to the end, learning from everyone and everything around him, giving back whatever and whenever he could.

David graduated from the Danbury High School Class of 1973 and went on to the University of Connecticut at Storrs, where he majored in Art. After college, he enjoyed a wonderful career as a sculptor for the Medallic Art Company. Possessing elite old-world carving and modeling skills, and an innate sensitivity to the way light reveals the detailing in medallic art, he was entrusted with sculpting and reworking lettering and portraits for the Nobel Prize medal; he sculpted the Pritzker Prize for Architecture, seals of the State of Connecticut, a number of universities and for towns such as Trumbull and Danbury; Olympic medals and many others throughout his long career. He won numerous awards for his work including one from the Sculpture Society of France. David also worked with sculptor Marc Mellon on many of Mellon's well-known medallic art, including the hand-carved lettering for the Official 2009 Presidential Inaugural Medal honoring Barack Obama, the Albert Schweitzer Leadership for Life Award, and very recently, the Walt Whitman Bicentennial Medal. David’s skills in rendering fine detail and architectural reliefs were also put to work on the Dean's Medals for Johns Hopkins University and the University of Rochester, and on the Lincoln Memorial for Mellon's 2013 Obama-Biden medal. In addition to his sculpting, David loved teaching Building Science courses at Capitol and Naugatuck Valley Community Colleges, and working as a self-employed carpenter.

His most treasured  and memorable accomplishments were those which could not be measured by outward successes. David was a unique, thoughtful, and humble man who felt in his core, the “importance of acknowledging the humanity in everyone” he encountered. Driven since childhood by a wonder-filled insatiable curiosity, his eclectic passions included trying to figure out how absolutely everything works, and then challenging himself to fix it; researching his vast lifelong musical and art interests, “puttering” around the yard and garage, restoring antique cars, quantum physics, history, “collecting” tractors and much more. He was known and loved for his always-quirky and inventive perspectives and for his enthusiastically described stories.  The original “google”, he served as a source of constant and reliable information on almost every topic imaginable.

He was a genuine and loving caretaker of both people and things, quietly taking care of everyone and everything around him. He never sought credit or praise and was incredibly generous with his time and attention. Whether it was rescuing a struggling plant in his wild gardens or patiently teaching his daughters to drive in the snow, David was best known as someone who took such care in “doing small things with great love.”

He is survived by his cherished daughters and wife whom he loved and loved him with all of their hearts, each one holding his greatest characteristics dearly within their hearts.  His creativity lives on within his daughter Alison and her fiancé Mike, his generosity of spirit within his daughter Caitlin and her husband Nate, and his great capacity for love within his wife and childhood sweetheart, Patricia  A. Targett, whom he first married when they were 8 years old, and then again 40 years later.

He is also survived by his father, Ben, sisters, Debbie, Laurie and Suzie; Aunts, Cousins, Nieces and Nephews and many loyal friends. David is predeceased by his loving mother, Ardith Beers Castruccio, and best friend and father-in law, Richard M. Targett, Jr., who both taught him what it meant to be courageous in the face of illness and adversity.

The family extends their gratitude to the staff at both Memorial Sloan Kettering, (especially those on the 16th floor); and at Weil-Cornell NY Presbyterian Hospital for their dedication, kindness and time spent with David for the months he was hospitalized.

The family will receive friends and family at the Danbury Memorial Funeral Home, 117 South Street in Danbury, CT on Friday, October 18, 2019 from 6 to 8 p.m. Mass of Christian Burial will take place on Saturday, October 19, 2019 at 10 a.m. at St. Joseph Church,  8 Robinson Avenue, in Danbury, CT.

Contributions in David’s memory can be made to The David E. Castruccio Annual Art Scholarship that the family is setting up at Danbury High School in his honor.